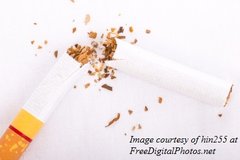 Your Mouth - The Effects of Smoking

Tobacco contains chemicals that are harmful to the human body and the smoking or chewing of tobacco is the cause of 80–90% of oral cancers. Other oral consequences of tobacco consumption include increased risk of periodontal disease, bad breath, tooth discolouration, an increased build up of dental plaque, and delayed healing following tooth extraction, periodontal treatment or oral surgery. Smoking is bad for the health: it increases the risk of several types of cancers (lung cancer, pancreatic cancer, cervical cancer, cancer of the  kidney, liver cancer, cancers of the mouth, lip, throat, bladder cancer, stomach cancer and leukaemia), emphysema and other respiratory diseases, coronary heart disease, stroke, diabetes and ulcers. Smoking is also associated with adverse pregnancy outcomes – increased spontaneous abortions in the first trimester, premature placenta abruption, preterm delivery, decreased birth weight, sudden infant death syndrome – and earlier menopause in women and sperm abnormalities and impotence in men. It affects the senses of taste and smell.

The perils of smoking extend beyond active smokers to include those who are in their environment (i.e., passive smokers): second-hand smoke contains at least 50 known carcinogens and other harmful chemicals. Smoking is the single most important preventable cause of illness and death. It is responsible for an estimated 30% of all cancer diseases and deaths and 90% of all lung cancers. Compared to those who have never smoked, smokers are almost twice as likely to have a heart attack. Smokers shorten their life expectancy by 10–15 years on average. By simply quitting smoking, however, smokers can, over time, reduce their risk levels.

Within the EU, Ireland has the highest smoking-related annual mortality rate, with 300 people in every 100,000 or approximately 7,000 people every year dying from smoking related diseases.  Some 29% of adults surveyed in SLÁN 2007 reported being current smokers, 83% of whom smoked on a daily basis. Among school age children surveyed in the HBSC 2010, 27% reported having ever smoked and 12% reported being current smokers, with older children and those from lower social classes more likely to report both behaviours.

When smoking is accompanied by alcohol consumption, its ill effects on health can be synergistically amplified: smokers who are also alcohol drinkers have a risk of oral cancer greater than the combined risk of those who only smoke and those who only drink alcohol.