Periodontal or gum disease is a pathological inflammatory condition of the gum and bone support (periodontal tissues) surrounding the teeth.
Most Irish adults suffer from some form of periodontal disease: based on the most recent national oral health survey, only 18% of 16–24 year olds, 8% of 35–44 year olds and 7% of older people aged 65 years and over have healthy gums.

The two most common periodontal diseases are:

Most children have signs of some inflammation of the gingival tissue at the necks of the teeth; among adults, the initial stage of gum disease is prevalent. This condition is termed gingivitis and is characterised by redness of the gum margins, swelling and bleeding on brushing.

Gingivitis occurs in both chronic and acute forms. Acute gingivitis is usually associated with specific infections, micro-organisms, or trauma. Chronic inflammation of the gum tissue surrounding the teeth is associated with the bacterial biofilm (plaque) that covers the teeth and gums. Gingivitis was once seen as the first stage in a chronic degenerative process which resulted in the loss of both gum and bone tissue surrounding the teeth. It is now recognised that gingivitis can be reversed by effective personal oral hygiene practices.

No specific public health measure has been developed to prevent gingivitis other than the instruction of groups and individuals on how to  effectively remove the bacterial plaque from around the teeth and gums with a toothbrush and floss. The acceptance of toothbrushing as part of daily grooming seems to have resulted in mouths being generally cleaner and showing less signs of inflammation, particularly among younger adults, though gingivitis is still widespread in the population.

When periodontal disease affects the bone and supporting tissue, it is termed periodontitis and is characterised by the formation of pockets or spaces between the tooth and gums.

This may progress and cause chronic periodontal destruction leading to loosening or loss of teeth. The dynamics of the disease are such that the individual can experience episodes of rapid periodontal disease activity in a relatively short period of time, followed by periods of remission.

Though the majority of adults are affected by gingivitis, gingivitis fortunately does not always develop into periodontal disease. Progression of gum disease is influenced by a number of factors which include oral hygiene and genetic predisposition. One of the challenges for early detection of periodontal disease is its “silent” nature – the disease does not cause pain and can progress unnoticed. In its early stages, bleeding gums during toothbrushing may be the only sign; as the disease advances and the gums deteriorate, the bleeding may stop and there may be no further obvious sign until the teeth start to feel loose. In most cases, periodontal disease responds to treatment and although the destruction is largely irreversible its progression can be halted.

The rate of progression of periodontal disease in an individual is dependent on the virulence (or strength of attack) of the bacterial plaque and on the efficiency of the local and systemic immunoinflammatory responses in the person (host). The overall balance between the bacterial plaque challenge and the body’s immunoinflammatory responses is critical to periodontal health. Current research suggests that host responses are influenced by specific environmental and genetic factors which can determine the general susceptibility of the host or the local susceptibility of a site (tooth) within the mouth to periodontal disease. In this regard, it is common for more severe forms of periodontal disease to present in individuals with compromised immune systems, e.g., those with diabetes, HIV infection, leukaemia and Down syndrome.

Smoking and diabetes are well-established risk factors for periodontal disease. Acute necrotising ulcerative gingivitis (Vincent’s disease) occurs almost exclusively in smokers. Diet also impacts on periodontal health, from both the perspective of plaque build-up and that of the body’s immunoinflammatory responses. Stress has also been linked to periodontal  disease, but it is not clear whether the relationship has a physiological basis or is due simply to the fact that individuals under stress are less likely to perform regular good oral  hygiene.

As already stated, the vast majority of gum diseases can be easily prevented by daily thorough plaque removal. However, irregularities around the teeth such as overhanging edges on fillings, poorly contoured fillings, and some types of partial denture designs make tooth cleaning difficult and encourage the accumulation of plaque. The presence of calculus (tartar) – plaque that has calcified and hardened – may also cause plaque to accumulate more readily and requires professional removal (scaling). For the majority of the population, however, periodontal health can be effectively maintained by proper oral hygiene practices as well as avoidance of behavioural and environmental risk factors (e.g., tobacco smoke, stress, poor diet) on the part of the individual.

, it is important not only for oral health but also for general health to control periodontal disease.

Plaque control is the most important method of limiting periodontal disease and maintaining gingival health. This must be considered at two levels: what individuals can do for  themselves by way of plaque control on a daily basis, and what dentists and hygienists can do to eliminate plaque retention factors in individuals and to advise patients on the most appropriate home care. 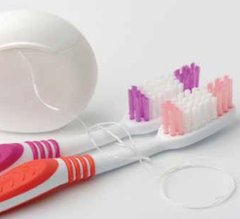 The most important plaque control method is toothbrushing,  which should be established as a daily routine from early childhood. Parents/carers should commence brushing their child’s teeth (without toothpaste until age 2 years) as soon as  the first tooth appears in the mouth. From age 2 years, a peasized amount of toothpaste containing 1,000–1,500 ppm fluoride is recommended. Parents should continue to brush their child’s teeth until the child develops sufficient manual dexterity to effectively brush his/her own teeth (approximately age 7 years). Parents should ensure that the first permanent molar teeth, which appear at the back of the mouth at about this time, are included in the brushing routine as soon as they appear. Toothbrushing skills should be taught to people of all ages.

The precise technique is less important than the result, which is that plaque is removed effectively every day without causing damage to the teeth or gums.

A gentle scrub technique with very short horizontal movements to dislodge plaque at the gum margins is effective for most people and is easy to teach and readily accepted. Thus, careful use of a gentle scrub method using a toothbrush with densely packed, round-ended synthetic filaments of soft to medium texture should be encouraged for effective plaque removal. A toothbrush with a small brush head may also be recommended, as a small brush head enables better access to the back of the mouth and to tooth surfaces than a large brush head. While  a variety of powered toothbrushes have become increasingly available, only powered toothbrushes with a rotation oscillation action (i.e., brush head moves in one direction and then the other) have been found to be better than manual toothbrushes at removing plaque and reducing gum inflammation, and are no more likely to cause injuries to gums.

Faulty toothbrushing techniques involving excessive pressure may considerably increase gingival recession (i.e., the gum line recedes leading to exposure of the roots of the teeth), and loss of tooth substance by mechanical abrasion, and must therefore be corrected. Holding the toothbrush in a pen grip using just the thumb and forefinger, as opposed to resting the toothbrush in the palm of the hand and gripping with four fingers, results in less pressure being applied when toothbrushing and is recommended.

Plaque removal can be aided with the use of:

Plaque disclosing agents colour plaque to make it easily visible and are a useful aid for improving plaque control. Plaque disclosing agents should be used after brushing the teeth, to reveal areas where plaque still remains. Plaque disclosing agents will not in themselves remove plaque, but simply direct users to areas that they have missed with their  toothbrush. Dental floss and other interdental cleaning aids are of value if used correctly, which usually requires professional advice and instruction. An additional method of plaque control is the use of antiseptics, of which chlorhexidine is the most effective. Although chlorhexidine is available over the counter in Ireland in the form of mouthrinses and gels, its tendency to stain teeth and impair taste makes its long-term use generally unacceptable. Toothpastes and mouthrinses containing other antiseptic agents, while less effective than chlorhexidine, do not have these side effects and are of some value to gingival health.

Starting with clean hands, break off about 45 cm (18 inches) of dental floss from its dispenser. Wind one end of the floss around a middle finger of one hand. Wrap the other end and most of the floss on the same finger of the other hand, leaving a small length (7 to 10 cm / 3 to 4 inches) stretching between the hands. With the floss held tightly between thumb and forefinger or using your interdental flosser, use a gentle sawing motion to guide the floss between adjacent teeth. Take care not to snap the floss against the gums when doing this to avoid injury.

When the floss reaches the gum line, curve it into a C shape against one tooth and gently slide it into the space between the gum and the tooth. With the floss kept tight against the side of the tooth, gently move the floss away from the gum with up and down motions. Repeat this scrubbing action to clean plaque off the adjacent tooth. If preferred, interdental flossers such as shown in the image may also be used. Move the floss back out from between the flossed teeth and repeat this procedure till all teeth have been cleaned. As the floss gets frayed or dirty, unwind unused floss from one hand and take up the used slack on the other hand. Wash hands again after flossing. 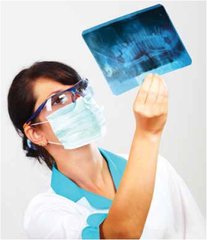 It is the responsibility of the dental clinician to ensure that any dental treatment provided minimises plaque retention; this is a part of treatment planning. Clear advice must be given on the need to clean bridges, dentures and orthodontic appliances (braces) effectively and regularly. Calculus (or tartar) is a form of hardened (mineralised) plaque, which can form on teeth both above gum level and within periodontal pockets. Calculus cannot be removed by toothbrushing; careful professional scaling is needed for its removal. While appropriate professional treatment is important, it must be stressed that the highest priority for plaque control is effective daily oral hygiene by the individual.

Periodontal disease can be prevented with: