Dental caries (tooth decay) is a major oral health problem in most industrialised countries, affecting 60–90% of schoolchildren and the vast majority of adults.

The early manifestation of the caries process is a small patch of demineralised (softened) enamel at the tooth surface, often hidden from sight in the fissures (grooves) of teeth or in between the teeth. The destruction spreads into the softer, sensitive part of the tooth beneath the enamel (dentine). The weakened enamel then collapses to form a cavity and the tooth is progressively destroyed. Caries can also attack the roots of teeth should they become exposed by gum recession. This is more common in older adults.

Dental caries is caused by the action of acids on the enamel surface. The acid is produced when sugars (mainly sucrose) in foods or drinks react with bacteria present in the dental biofilm (plaque) on the tooth surface. The acid produced leads to a loss of calcium and phosphate from the enamel; this process is called demineralisation.

The main treatment option for a tooth cavity is to drill out the decay and put in a filling (restoration) made from various materials (e.g., composite resins, amalgam, porcelain).Extensive tooth decay may necessitate a crown, root canal treatment or even extraction of the tooth.

During the 1990s, there was strong controversy regarding the possible damage to health from the use of mercury amalgam material to fill cavities caused by decay. Extensive research has shown that there is no valid scientific evidence to support a link between the presence of amalgam fillings in the mouth and systemic disease. A safety review (2008) conducted by the Scientific Committee on Emerging and Newly Identified Health Risks (SCENIHR) of the European Commission confirmed that both mercury amalgam and alternative filling materials such as composite resins, glass ionomer cements, ceramics and gold alloys are safe to use for restoring teeth. Nonetheless the Minamata Convention on Mercury (2013) includes agreement to a global phase-down of the use of dental fillings containing mercury amalgam taking into account the domestic circumstances of individual countries. The need to ensure environmentally sound storage and final disposal of the product was also agreed. 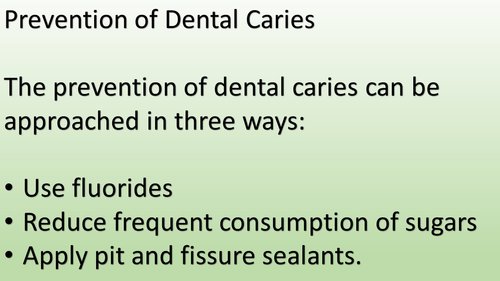 Fluoride is a substance that naturally occurs in some water sources. It is derived from fluorine, the thirteenth most common element on earth, and is known to help prevent dental  aries. In Ireland, an estimated 73% of the population reside in communities served with water supplies containing a regulated amount of fluoride. The permissible range of fluoride in drinking water in Ireland is presently set at 0.6–0.8 parts per million (Health (Fluoridation of Water Supplies) Act 1960, (S.I. No. 42 of 2007)). This level of fluoride in drinking water is deemed optimal for the oral health of all age groups, including infants.

The dramatic improvement seen in the oral health of Ireland since the introduction of water fluoridation in the mid-1960s – particularly among children and young adults with lifetime exposure to water fluoridation (labelled “Full Fl” in charts) – has been mainly attributed to the caries-preventive effect of fluorides in water and in toothpaste. 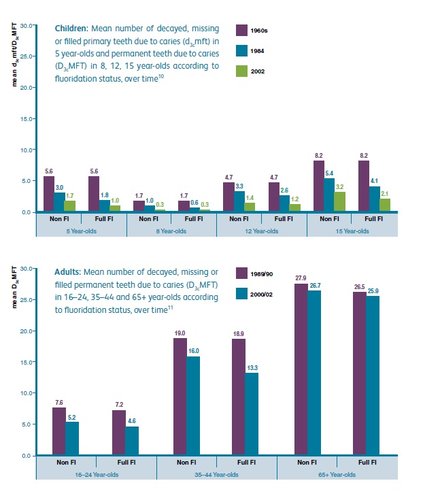 Fluoride works mainly by slowing down the process of demineralisation, whereby the enamel loses calcium and phosphate when exposed to acid following ingestion of food and drinks which contain sugars. It also helps to “heal” (remineralise) surfaces which show early signs of calcium or phosphate loss, such as an opaque appearance. Most benefit is obtained if a low level of fluoride is constantly maintained in the mouth throughout the day.

Fluoride delivered directly (or topically) to the tooth surfaces by toothpastes and rinses help to maintain fluoride levels in the mouth and provide added benefit to the fluoride delivered systemically via water fluoridation. Introduced in the mid- 1970s, fluoride toothpastes now account for over 95% of the toothpaste sales in this country. The sale of mouthrinses, many of which contain fluoride, has also increased considerably since the mid-1980s.

The main advantage of water fluoridation is that its cariesreducing effects are available to everybody on the fluoridated water supply and is considered safe even for infant use. Bottled drinking waters contain highly variable amounts of fluoride depending on their source. While it is legally permissible for bottled natural mineral waters to contain up to 5 mg/l of fluoride, when fluoride concentration exceeds 1.5 mg/l the warning “contains more than 1.5 mg/l of fluoride: not suitable for regular consumption by infants and children under 7 years of age” must be clearly carried on the bottle label (Commission Directive 2003/40/EC).

Fluoride toothpastes are an important source of additional fluoride and should be used twice a day to help maintain a constant level of fluoride in the mouth. Daily fluoride  mouthrinses are particularly useful for people who are prone to high levels of decay and also for people wearing orthodontic braces; fortnightly fluoride mouthrinse programmes are used in a number of schools in non-fluoridated areas. It is advisable that fluoride mouthrinsing be carried out at a different time from fluoride toothbrushing to maximise the added benefits from these topical fluorides. Fluoride varnishes and gels are alternative forms of topical fluorides that require application by a dentist or dental hygienist.

There are no known side effects of water fluoridation at the optimal level, other than dental fluorosis. Dental fluorosis is mainly a cosmetic condition, commonly characterised by fine white lines or white patches on the teeth. The risk of developing dental fluorosis is linked to the ingestion of excess fluoride during enamel formation (amelogenesis) of the  permanent teeth in childhood. International research indicates that the early use of fluoride toothpastes in young children can lead to the development of fluorosis in permanent  teeth.

In Ireland, dental fluorosis remains at the very mild to mild level as measured by the Dean’s Index. However, the increase in the prevalence of dental fluorosis when levels of water fluoridation had remained constant (at 0.8–1.0 ppm between 1964 and 2007) suggests that young children are swallowing excess fluoride from toothpaste. As a result of this finding, in 2007 the permitted level of  fluoride in water was lowered from 0.8–1.0 ppm to 0.6–0.8 ppm as a means of reducing the total intake of fluoride among young children. Recommendations on the appropriate use of fluoride toothpaste in young Irish children issued by the Expert Body on Fluorides and Health (http://www.fluoridesandhealth.ie/) advise that children aged 2–7 years should use only a small pea-sized amount of fluoride toothpaste 1,000–1,500 ppm and be supervised by an adult when toothbrushing; children under 2 years of age should not use toothpaste except on professional advice.

The Irish Expert Body on Fluorides and Health advises: 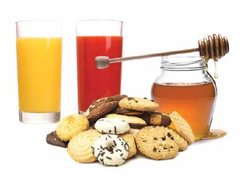 There is overwhelming evidence that frequent consumption of sugars is associated with caries. Dietary advice should be aimed at limiting the frequency of sugar intake. Studies have shown that sugar consumption remains a moderate risk factor for caries even when populations have adequate exposure to fluoride, and that exposure to fluoride coupled with a reduction of sugar intake has an additive effect on caries reduction. In a comparison of food habits in children and adolescents in 35 countries and regions covering Europe, Israel  and North America, Ireland ranked as having the highest average weekly frequency of sweets consumption.

Foods and drinks containing “free sugars” (i.e., sugars which have been added to food plus sugars naturally present in honey, fruit juices and syrup) should be recognised and the frequency of their intake – especially between meals – reduced. As shown in the Stephan curves opposite, the intake of sugar between meals increases the periods of time plaque pH dips below the critical level of 5.5. When plaque pH is lower than 5.5,  remineralisation occurs. Subjecting teeth to frequent bouts of demineralisation allows less time for their remineralisation; thus, teeth become more susceptible to decay. Detailed  advice on nutrition and oral health is given here https://www.dentalhealth.ie/dentalhealth/nutrition.html 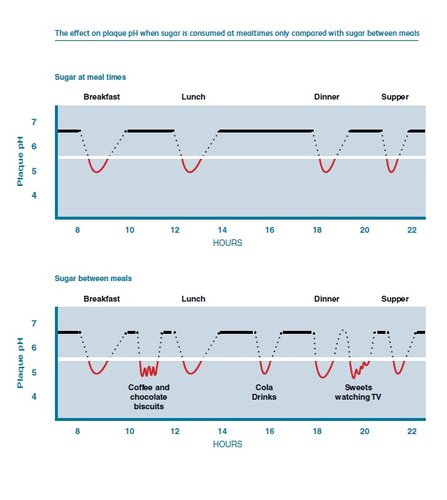 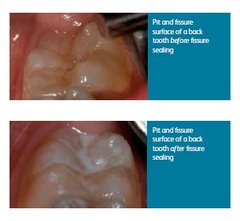 Pit and fissure sealants create a thin barrier preventing the access of plaque and plaque acids to the enamel surface. Their effectiveness at preventing caries has been demonstrated in a number of systematic reviews. However, sealants are only effective on the biting surfaces of teeth and should be seen as only one part of a comprehensive caries prevention  programme which includes promotion of healthy eating and, for children over age 2 years, twice daily use of fluoride toothpaste containing at least 1,000 ppm F.

When devising a strategy for the control of dental decay for an individual patient or for a community, it is strongly recommended that a combination of these preventive measures – use fluorides, reduce frequent consumption of sugars, seal fissures – should be used, taking into account their cost and the effort required of the individual or community.