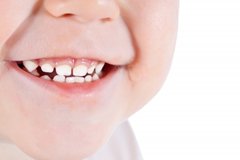 Image courtesy of Serge Bertasius Photography at FreeDigitalPhotos.netThe development of the teeth within the jaw continues after birth. Normally, the first primary teeth start to appear in the mouth around six months after birth. The primary central incisors,lateral incisors, first molars, canines and second molars normally appear in this order at intervals from 6-24 months. By age two and a half years, most children have their full complement of 20 primary teeth - 10 teeth in the upper (top) jaw and 10 teeth in the lower (bottom) jaw. As the child grows, the jaws also grow and spaces may begin to appear between the primary teeth.
This growth makes spaces for the larger permanent teeth. Tooth eruption times vary widely from child to child and the ages shown in the tooth eruption charts on page 11 represent average times of eruption. From as early as age 5 years, the first permanent teeth, normally the four first permanent molars, begin to appear in the mouth.These erupt at the very back of the mouth behind the last primary tooth. As no teeth fall out to make way for these new permanent first molars, it is not unusual for the emergence of the first molars to go unnoticed. At the same time, the two primary lower central incisors begin to loosen and fall out as the permanent lower central incisors emerge in their place. Over the following six years or so, the remaining 18 primary teeth fall out and are replaced by permanent teeth. From about age 11 years, the four second permanent molars appear behind the first permanent molars. The last teeth to appear are the third molars or wisdom teeth. Not everybody has third molars and there is considerable variation in the age at which they erupt

During the first two years of life, the most common side effect of teething is drooling or dribbling. Though the response to tooth eruption is very varied, symptoms of teething may include
disturbed sleep, feeding irritability and swollen tender gums. Severe symptoms such as diarrhoea, fever and convulsions require medical attention and should not be attributed merely to teething.